2 Years on From George Floyd’s Death; How Far Have We Come?

25th May 2020. The day that a Black man’s life was taken by a white, male police officer. A tragedy that sparked an outcry from around the globe; an outcry for real change; an outcry from those with lived experience, leaders, organisations and allies alike of  if not now when?

2 years on from the murder of George Floyd, how far have we actually come to achieving an anti-racist society and, more specifically, the workplace?

There was a lot of activity, action and noise with many organisations making statements, posting on social media, in particular blackout Tuesday with the message we can do more and that we care.

From our research nearly 100% of those with lived experience felt it was done for PR marketing and virtue signalling.

In the summer of 2020, many organisations looked into signing up to race charters, employee training, especially unconscious bias training, despite there being little evidence that any of these have had an impact significantly on tackling racing inequality in organisations.

In addition, many organisations created and released race action plans; some were done knee jerk, some with the input of external agencies and others with genuine good intent by fully involving ethnic minority colleagues.

Many businesses also encouraged or asked their ethnic minority staff especially Black colleagues to talk about their experiences as a Black person.

Many did step forward to share their stories in the hope and belief that this would spark the change that they wanted to see and feel.

Six months later the feedback we got on this was, for the majority, a very traumatic experience and what was most frustrating and upsetting was that, despite hearing their stories, their thoughts, experiences and feelings the organisation didn’t create any meaningful change.

Micro-aggressions and racism being swept under the carpet continues in organisations throughout the UK and beyond, despite organisations signing race charters, doing audits, and staff training. Policies may have been revised and zero tolerance mentioned, but in reality it is rarely zero. Illegal and unacceptable behaviours continue with no consequence to the perpetrator, but often significant consequence and harm to those receiving it.

So, it can be summed up there was lots of talk but very little meaningful action. 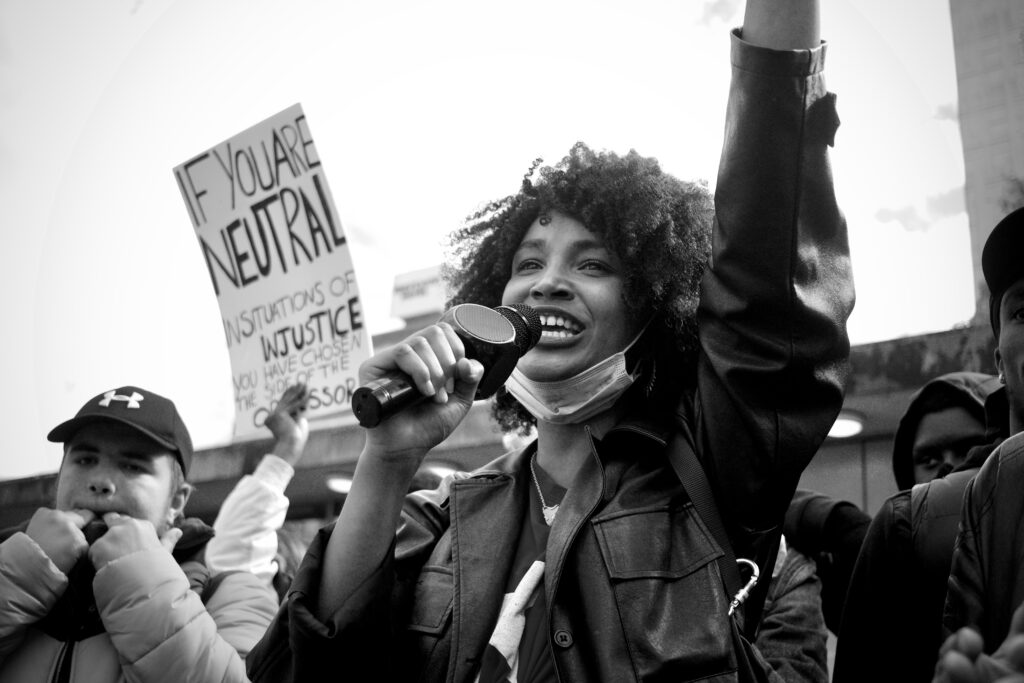 Where are we now?

Every quarter we collate feedback from thousands of people with lived experience of race inequality from hundreds of organisations across the UK and the general message was that very little action or meaningful action had actually taken place.

The majority weren’t aware of whether their organisations had signed a race charter or anything else but more significantly they weren’t seeing any meaningful activity or action happening beyond the initial fervour of ‘making noise’.

From over a dozen independent pieces of insight, with thousands of people contributing, typically only 27% believe their senior leaders and managers are comfortable talking about race, and this is now two years on.

So, for 73% it typically means that the subject and issue is avoided or that one off activities such as Black History Month take place, but little continuous tackling of the inequality throughout the rest of the year.

It is true that decades of disparity and prejudice can’t be undone in a few short years, but what we have seen is a real lack of serious action that is truly addressing the problems.

But there are positives

Despite progress being slow, it should be acknowledged that some organisations are creating meaningful change and are on the journey for race equality. BT who not only have published its ethnicity pay gap, but has broken it down into the various groups and communities within it so even within that it helps them identify the colleagues who are most disadvantaged within the ethnic minority workforce and provides them with the data to guide them as to where they need to invest to create change.

Helen Moulinos from POhWER has worked closely with colleagues throughout the organisation and publicly shared the findings from discussions about whether they are an anti racist organisation. Helen questioned what’s not working, what they need to do, what they need to change. Helen acknowledges that they have a long way to go but by being open, honest and sharing brave discussions, change will happen.

Alexandre Maria from Inmarsat told us that following the implementation of one of our solutions, Safe Space, they reviewied the recruitment process in collaboration with the HR team and the specific recruitment agencies; challenging those agencies to provide more diverse candidates and pushing back if their shortlist was not diverse enough.

So, there are examples being set for others to follow and there is some light on the horizon.

How can organisations improve?

It is crucial that meaningful activity is ongoing. Tackling race inequality is not just for Black History Month or Diversity Week or even for Race Equality Week. It is not a pop up. It is something that needs to be addressed and become a part of an organisations DNA.

A great example is Northamptonshire Carers who have incorporated the Big Promise into its organisation corporate strategy, hence everyone is accountable for delivering on it.

Organisations need to collaborate and learn from each other; this shouldn’t be a competitive field. Race Equality Matters is there to create this collaboration where we showcase and highlight organisations that are making a meaningful impact. We believe with more than 3500 organisations engaging it demonstrates the need and real momentum for change. To build on this we are soon to launch the Trailblazer which will help identify those that are making a real impact.

What was clear from the aftermath of George Floyd’s murder was that there was the will for change, but not necessarily the skill or the knowledge on what to actually do. Therefore, we have developed solutions alongside those with direct lived experience that organisations can start to implement today. These solutions have been tried, tested and proven to make a real impact. Your journey to change can start today.

Following another horrific weekend after the racially motivated shooting in Buffalo, it’s not ok for people/organisations to once again make their ‘pop up’ pledges to be anti-racist – something they typically did 2 years ago. What we need is progress and for organisations to share what they have done since then.

We need to reflect with all honesty – can individuals, leaders and organisations that have made all of these statements about the change that is needed actually be transparent and accountable to their commitments?

We do believe there is hope and we encourage organisations that believe they are making a real impact to share their stories with us so we can share and demonstrate that meaningful progress is happening.