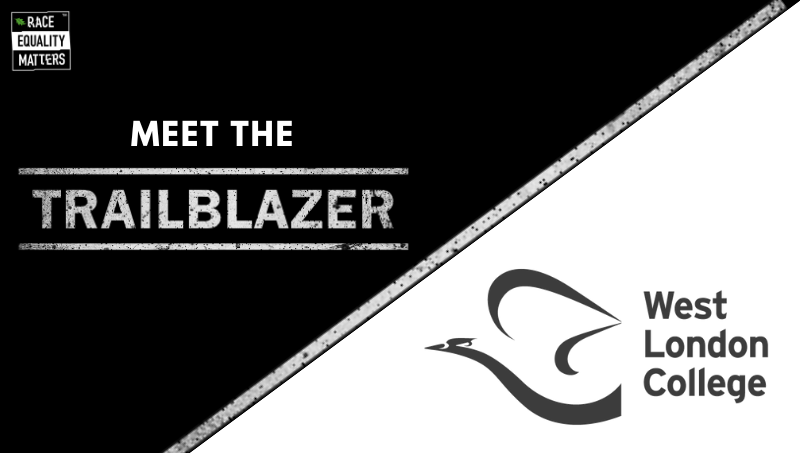 Race Equality Matters #MyNameIs, is a simple but highly impactful solution to ensure everyone pronounces people’s names correctly. The campaign calls to normalise phonetic spelling in your email signature, meetings, name badges and more. In a recent poll, 73% of respondents from more than 100 organisations said they had their names mispronounced. They told us it made them feel ‘not valued or important’, ‘disrespected’ and ‘that they didn’t belong’. 88% of respondents thought a phonetic name spelling campaign would help tackle race inequality.

As a strong applicant in our first cohort of Trailblazer applications, West College London is making genuine steps in tackling racial inequality. The independent judges- all of whom are ethnically diverse- unanimously recognised the successful implementation of the #MyNameIs campaign within the organisation. With just 64% of applications being successful in this round, West College London’s action has withstood the rigour necessary to become a Trailblazer. Through this, other organisations can learn and implement this in their own workplace.

West London College kickstarted their #MyNameIs campaign as part of their organisation’s Race Equality Week in 2022, as well as their professional development day. The organisation embedded the initiative visually on buildings across all camps, as well as virtually through email signatures. This process was welcomed and simple for employees to understand and endorse, as they told judges:

“It was simple, straightforward to implement – and had lots of resonance.”

Following this organisation-wide implementation, West London College conducted a staff survey to understand the impact of this initiative. The majority of staff had embedded this into their emails and professional use, and judges were informed that ethnically diverse staff considered #MyNameIs to have had “real resonance” upon the organisation. 66% of judges rated the action taken by West London College as “good”, with one praising the “breadth of application” across the entirety of the organisation’s facilities.

Moving forward, West London College continues to promote and utilise the #MyNameIs campaign. One judge celebrated the “ongoing” impact this would have, as the initiative is featured in all new staff inductions to ensure existing and new employees understand the importance of name pronunciation.

West London College has demonstrated commitment and impact for change. Their #MyNameIs Trailblazer status echoes the impact felt by the organisation’s ethnically diverse  employees. Celebrating our Trailblazer community will accelerate the change and momentum towards racial equality, through action not words.

If your organisation is driving change for Race Equality and you can demonstrate impact, endorsement from ethnic background employees and share future plans; register your interest for the next round of Trailblazers on our website.