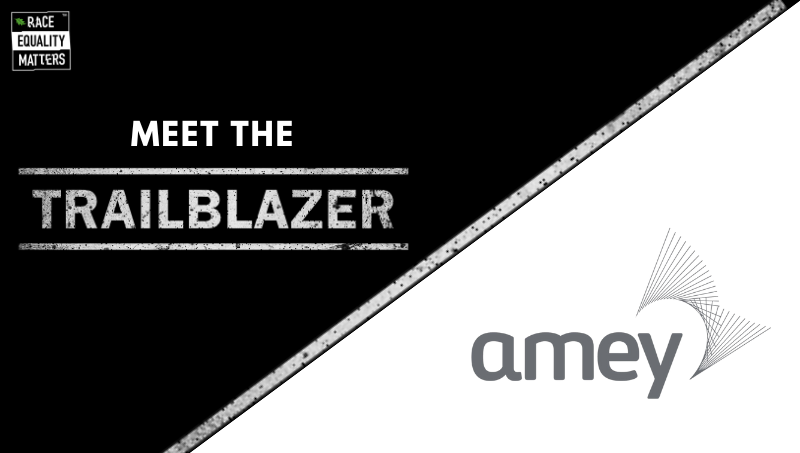 Race Equality Matters is pleased to announce that Amey have been awarded Bronze and Safe Space Trailblazer status!

Amey has been recognised and celebrated as an organisation that is committed to achieving racial equality in the workplace. Their sustained action, impact and commitment makes them a trailblazer for change. This has been decided by an independent panel of judges, in which 80% stated that Amey is the type of organisation they would like to work for.

Amey was awarded the Safe Space Trailblazer status as judges unanimously voted that the organisation had successfully run the solution. Amey demonstrated to judges that Safe Space had become a forum that had facilitated honest conversations with senior leaders, and most importantly had established actionable points to stimulate change.

“We know it’s not always easy to speak up at work especially as the leader holds the power – we wanted to remove that and hear what it’s really like to be in our workplace.”

Feedback from an Ethnically-diverse Panel

Alongside Amey’s permanent D&I position in the organisation, the race network- Multicultural Affinity Group- has led the change necessary for Bronze Trailblazer status. One judge reviewed that diversity and inclusion is a “key priority” of the organisation because of this.

“Our leaders have been through a comprehensive inclusion coaching experience based on lived experiences of others – by putting people in the shoes of others the light bulb switches on that it is harder for people of colour to break through irrespective of where they start in life.”

Feedback from an Ethnically Diverse Panel

“The bravery aspect stood out, particularly the big culture change from employees being told what to do, to suddenly giving them freedom to be involved and truly speak out about what could be better for people of colour despite this being difficult to hear.”

Amey have demonstrated commitment and impact for change. Their Safe Space and Bronze Trailblazer status echoes the impact felt by the organisation’s Black, Asian and ethnic minority employees. Celebrating our Trailblazer community will accelerate the change and momentum towards racial equality, through action not words.

If your organisation is driving change for Race Equality and you can demonstrate impact, endorsement from ethnic background employees and share future plans; register your interest for the next round of trailblazers.

“As a British-Pakistani, we are taught by generations before us not to draw attention to yourself, your race and to fit in. Fitting in at school, university, all the way through places of work. It’s exhausting! Amey have flipped that narrative and instead fits the business around its people. I’ve worked at Amey for nearly 5 years and in that time, I can see the steps the business is taking to be more and more inclusive. The shift in culture means I feel more able to share aspects of my heritage proudly, which leads to open discussions and genuine interest from colleagues across the business. Whether that’s bringing traditional food for lunch, wearing a piece of traditional clothing or jewellery, or even simply sharing my plans for the weekend which incorporates parts of my South-Asian custom – I’m able to proudly do that. When I’m being my authentic self, I can focus my energies on my role, rather than worrying about how I might fit in. As an Inclusion Ambassador, I want to continue to empower others like me to be their authentic selves at work and to also know that it’s safe to speak up when they feel something isn’t right.” – Maaheen Mir