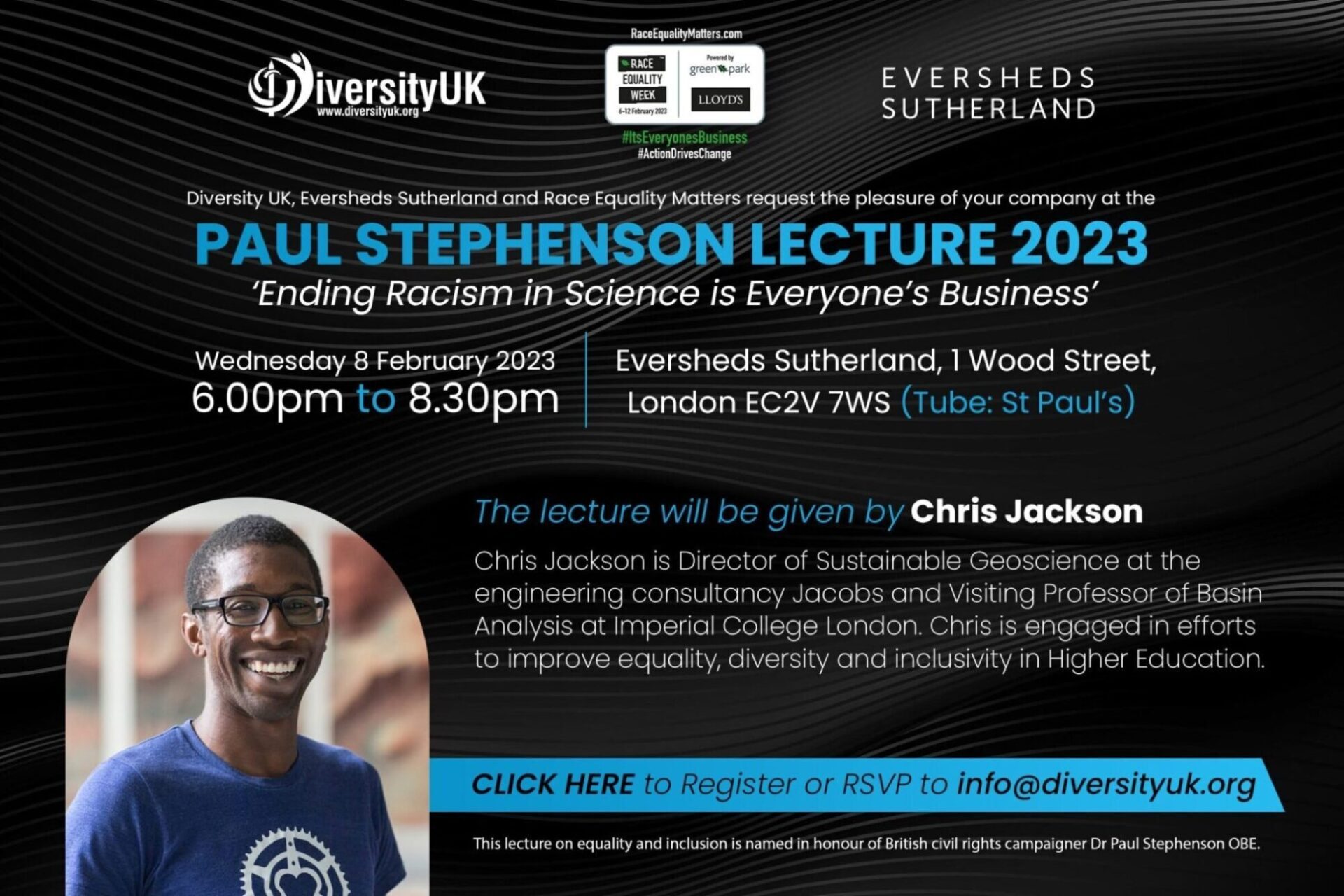 Diversity UK, Eversheds Sutherland and Race Equality Matters are to host the Paul Stephenson Lecture on Wednesday 8 February 2023 at a hybrid event from 6.00pm GMT, where geoscientist Chris Jackson will talk about why ‘Ending Racism in Science is Everyone’s Business’. The Diversity UK Paul Stephenson lecture on equality and inclusion, eponymous with the British, Bristol-based civil rights campaigner whose actions paved the way for the Race Relations Act 1965, has been hosted by Diversity UK since 2016. It has been realigned to take place during Race Equality Week, an annual UK-wide movement uniting thousands of organisations and individuals to address the barriers to race equality in the workplace, which takes place from 6th - 12th February this year.

The theme for Race Equality Week 2023 is #ItsEveryonesBusiness because tackling race inequality is everyone’s business. The government has laid out ambitious plans for the UK to become a Science Superpower and it has announced a number of initiatives in support of achieving this ambition; from investing £800 million in creating the Advanced Research and Invention Agency (ARIA) to the £480m new research support announced in The Chancellor’s Autumn Statement 2022. The overall aim is to increase economy-wide investment in R&D to 2.4% of GDP by 2027.

However, in 2020 guest editors for leading science magazine ‘Nature’ wrote ‘For centuries, science has built a legacy of excluding people of colour and those from other historically marginalised groups from the scientific enterprise. Institutions and scientists have used research to underpin discriminatory thinking, and have prioritized research outputs that ignore and further disadvantage marginalized people.’

Nature’s special issue entitled ‘Racism: Overcoming science’s toxic legacy’ included a feature by British geoscientist Chris Jackson who felt obligated to speak out against racism in UK institutions and how the lack of support left him disillusioned with academia.

Diversity UK, Eversheds Sutherland and Race Equality Matters are pleased to welcome Chris Jackson to give the Paul Stephenson Lecture 2023 in which he will talk about why ‘ending racism in science is everyone’s business’.

Chris Jackson is Director of Sustainable Geoscience at the engineering consultancy Jacobs and Visiting Professor of Basin Analysis at Imperial College London. Chris works in the general area of sedimentary basin analysis. When not studying rocks, Chris gives geoscience lectures to the public and in schools, having appeared on several, Earth Science-focused, television productions and podcasts. He gained prominence in 2017, when he co-presented Expedition Volcano, a BBC documentary, and in 2020 he became the first Black person to present the Royal Institution’s Christmas Lectures. Chris is engaged in efforts to improve equality, diversity, and inclusivity in Higher Education.

Click here to register for the online only event: https://bit.ly/3WNDVFN

Click here to register for the in-person event: https://bit.ly/3VaGoZK

Diversity UK inaugurated the first Paul Stephenson lecture, given by Helen Grant MP, in November 2016 at the Speaker’s House, House of Commons, in London in the presence of Dr Paul Stephenson OBE who spoke about his own upbringing and the boycott of the Bristol Omnibus Company that he led in 1963, which paved the way for the first Race Equality Act in 1965. Helen spoke about race and diversity in a post-Brexit Britain. Since then, the Diversity UK Paul Stephenson Lecture on race equality has been given by well-known equality campaigners including:

Dr Paul Stephenson OBE, is a community worker, activist and long-time campaigner for civil rights for the British African-Caribbean community in Bristol, England. As a young social worker, in 1963 Stephenson led a boycott of the Bristol Omnibus Company, protesting against its refusal to employ Black or Asian drivers or conductors. After a 60-day boycott supported by thousands of Bristolians, the company revoked its colour bar in August.

In 1964 Stephenson achieved national fame when he refused to leave a public house until he was served, resulting in a trial on a charge of failing to leave a licensed premises. His campaigns were instrumental in paving the way for the first Race Relations Act, in 1965. Paul Stephenson is a Freeman of the City of Bristol and was awarded an OBE in 2009. In July 2014, Mr Stephenson was awarded an honorary degree (Doctor of Law) by the University of Bristol “for his dedication to fighting for equality and civil rights across Bristol and around the world for over 60 years”. In November 2016, he was presented with the Diversity UK Lifetime Achievement Award and has its annual lecture named in his honour.